With so much uncertainty in the world today I thought it a good time for something light, fun and a little enchanting. I'd call this a story of hope. Let me know what you think. 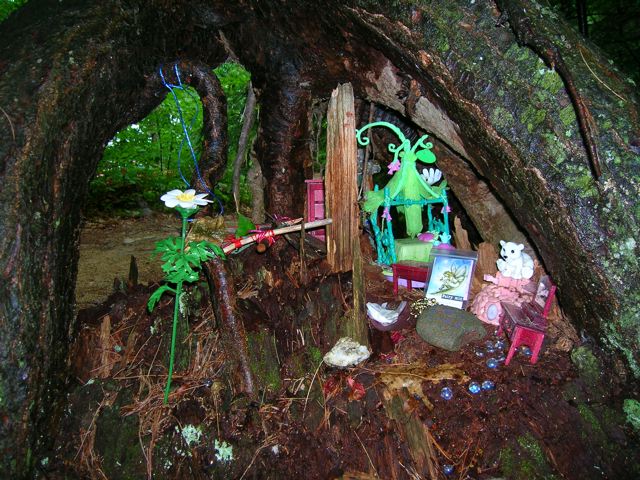 So much has happened since the inception of the “Fairy Tree.” It’s basically been dormant since the little girls down the street moved away several years back. I even found out they had moved because they left a note under the tree to let the fairies know how to find them. My children were not involved in the Fairy Tree. They were young adults when it all began. Now they are parents of young children. My oldest granddaughter turned 4 this year. That was the age of the little girl on the pink jeep.

In case you have never heard the story of the “Fairy Tree,” or would like to hear it again, to follow is my recount.

Late in the summer of 2005 my husband was driving down an uninhabited section of dirt road in a wooded area near our lake house. It was just after dusk when his headlights detected something glittery. Upon further investigation he thought I’d want to see what was there so he grabbed a flashlight and we walked down our driveway, around the corner, and part way up the hill to investigate. Someone had decorated the area beneath the trunk of a uniquely shaped hemlock tree, complete with fairy dust. There had been carefully placed: a white plastic teddy bear on a little throne, colored sea shells and plastic crystals. It was the fairy dust that had twinkled when lit by the headlights.

The tree is unique in that it has chosen to grow over a rotting stump. Its roots come up the middle and 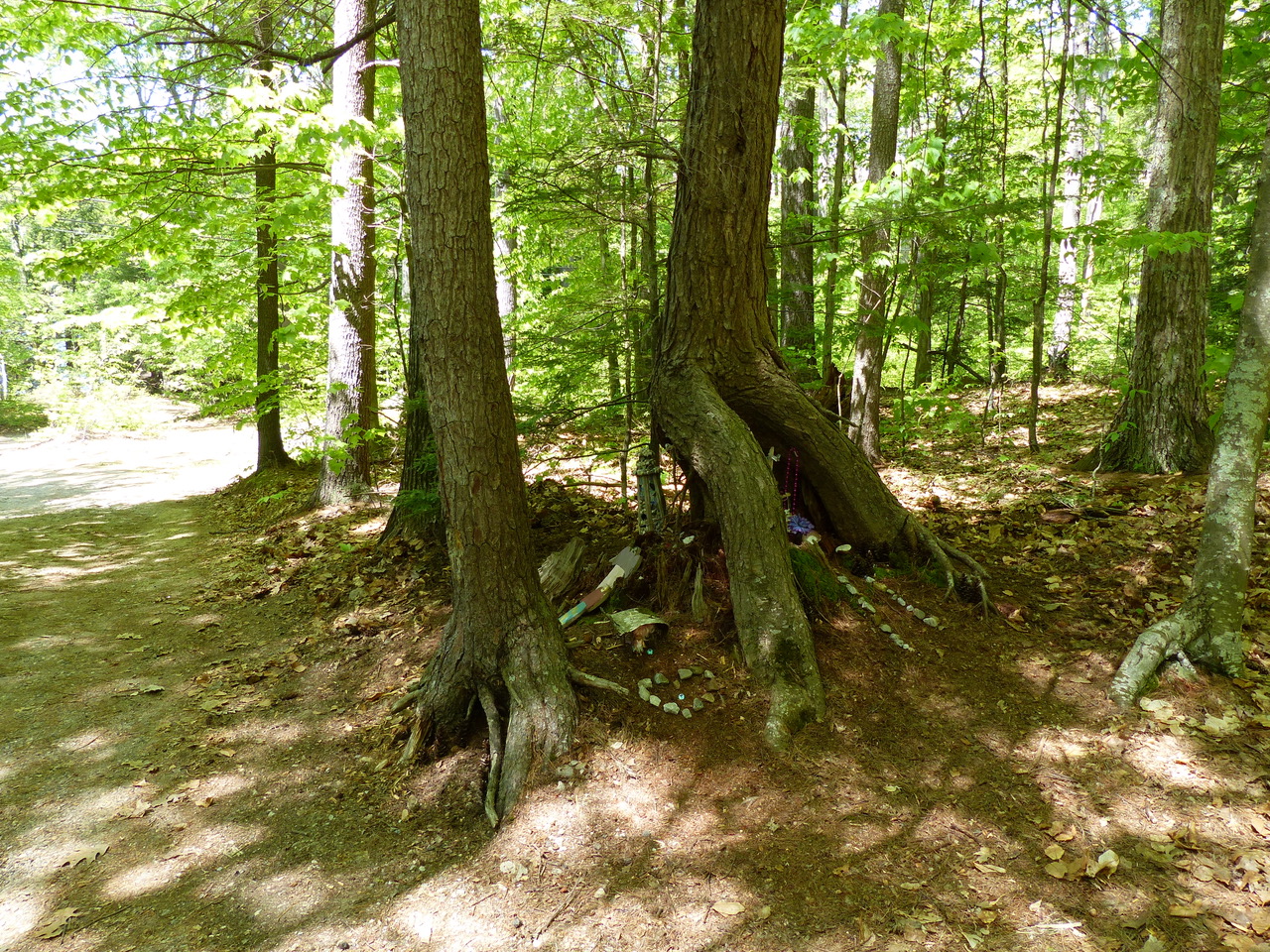 around the sides of the stump and the trunk of the tree grows up from there. The trunk begins about three feet off the ground. With a child’s imagination, one can easily envision an entire kingdom with the spires made by the dry rot from the stump below.

Spellbound by the enchantment of it all I wanted to make a contribution. We had some brightly colored Mardi Gras beads kicking around so the next morning I brought them up and draped them around the tree like garland.

From that day forward when visiting the lake house, I would find myself drawn to visit, what came to be known as, the “Fairy Tree.” But rather than delighted as I had felt on those first two visits, my subsequent encounters were leaving me feeling a little disheartened. With each visit I was noticing one less Mardi Gras necklace. It bothered me to think that someone would take my decorations. Especially since I had been so reverent of theirs. But summer was coming to a close and so were our visits to the lake house, so I didn’t give it much more thought. 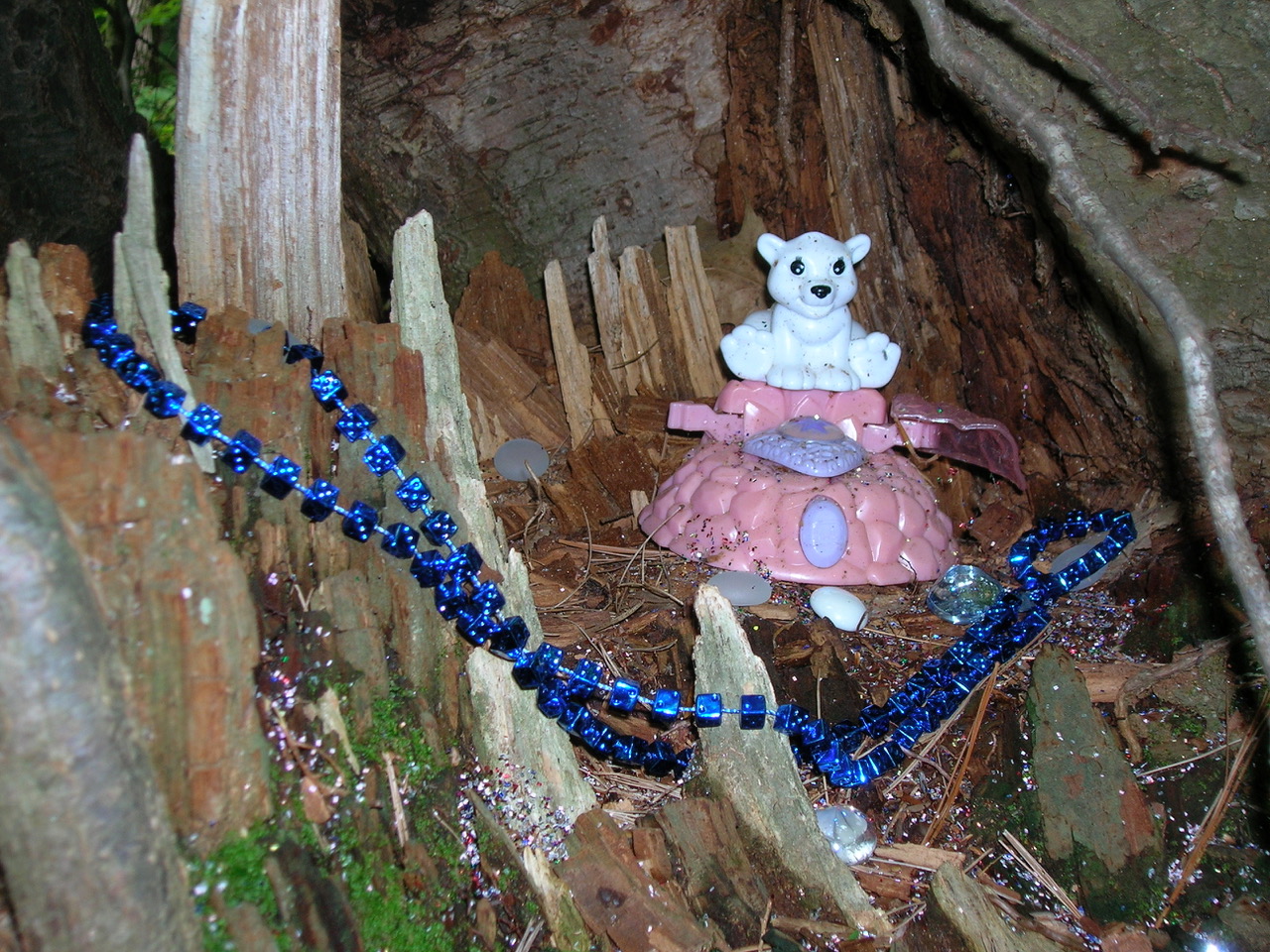 The following spring, when opening the lake house, I felt compelled to check on the tree. I found the decorations disheveled from a winter’s worth of snow. The plastic crystals were all gone, the snow had washed away the fairy dust and only one Mardi Gras necklace remained.

I purchased some fairy dust the following week and some pretty glass shapes and grabbed some marbles I had left over from a centerpiece in anticipation of resurrecting the miniature kingdom. When I returned with my decorations the last of the Mardi Gras necklaces had disappeared. I was a bit discouraged, but decided to redecorate anyway. As I added the finishing touches it crossed my mind to try one more Mardi Gras necklace. But this time I placed it in front of the teddy bear as an offering of sorts. Then I made a wish. I wished that a young child was taking the necklaces—thinking they were gifts from an enchanted source, which I kind of was.

The next week the necklace and some of the glass shapes and marbles had vanished. I could only hope that my wish had come true. 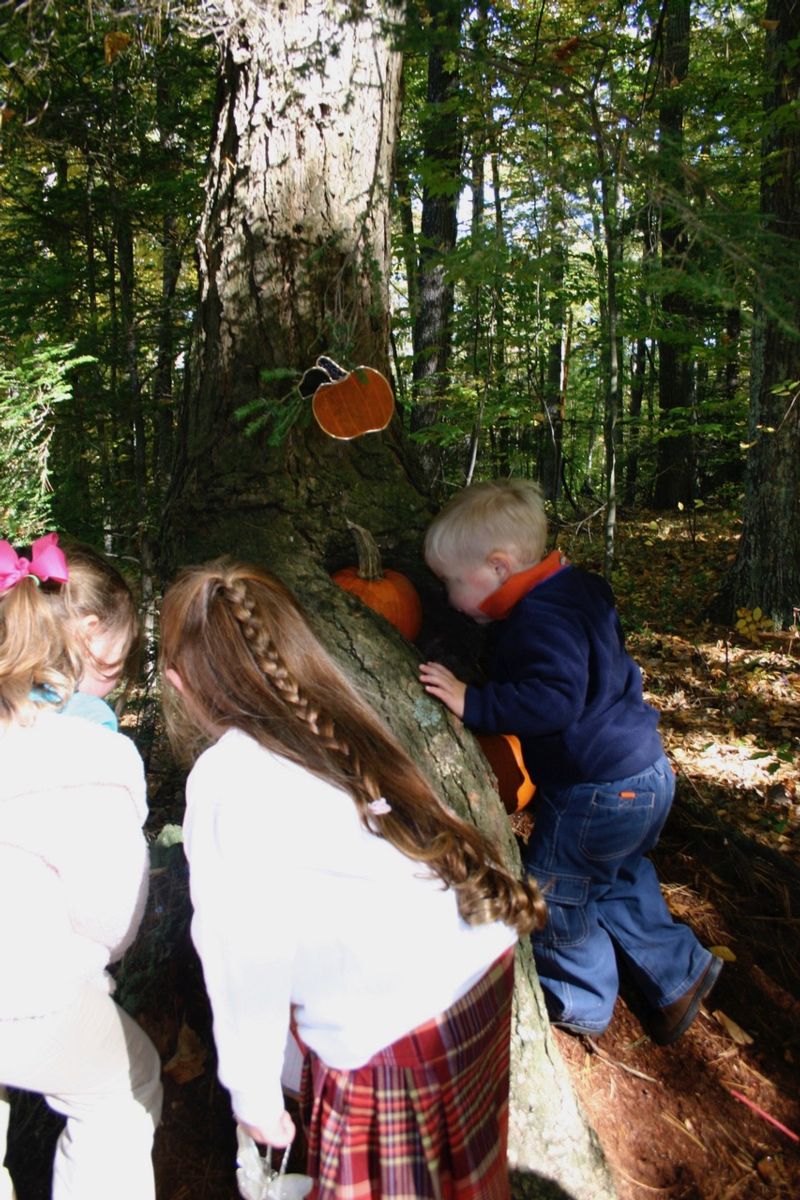 a weekday over the 4th of July. I was in the kitchen when I heard through the open window what sounded like a motorized vehicle and voices on the hill. I went to the door to see what I could through the trees. There was, what appeared to be, a little girl with a pink helmet riding a pink jeep with a pink flag. Lots of pink and a woman accompanied her. They stopped at the vicinity of the tree. Within moments I heard a squeal of delight. My hope was that the little girl was squealing with delight over finding the necklace I had placed there that morning.

I patiently waited until I was sure they were gone—all right, impatiently waited—to go up to the tree to see what had transpired. Just as I had suspected the necklace was gone. I was beyond delighted! When I got back to our house it was my turn to squeal as I shared the news with my husband. “I am a Fairy Godmother!” He couldn’t help but agree.

Every weekend for the remainder of the summer I would leave a little trinket under the tree and it would disappear during the week. Sometimes a shell or sand dollar decorated with glitter would be left in its place. 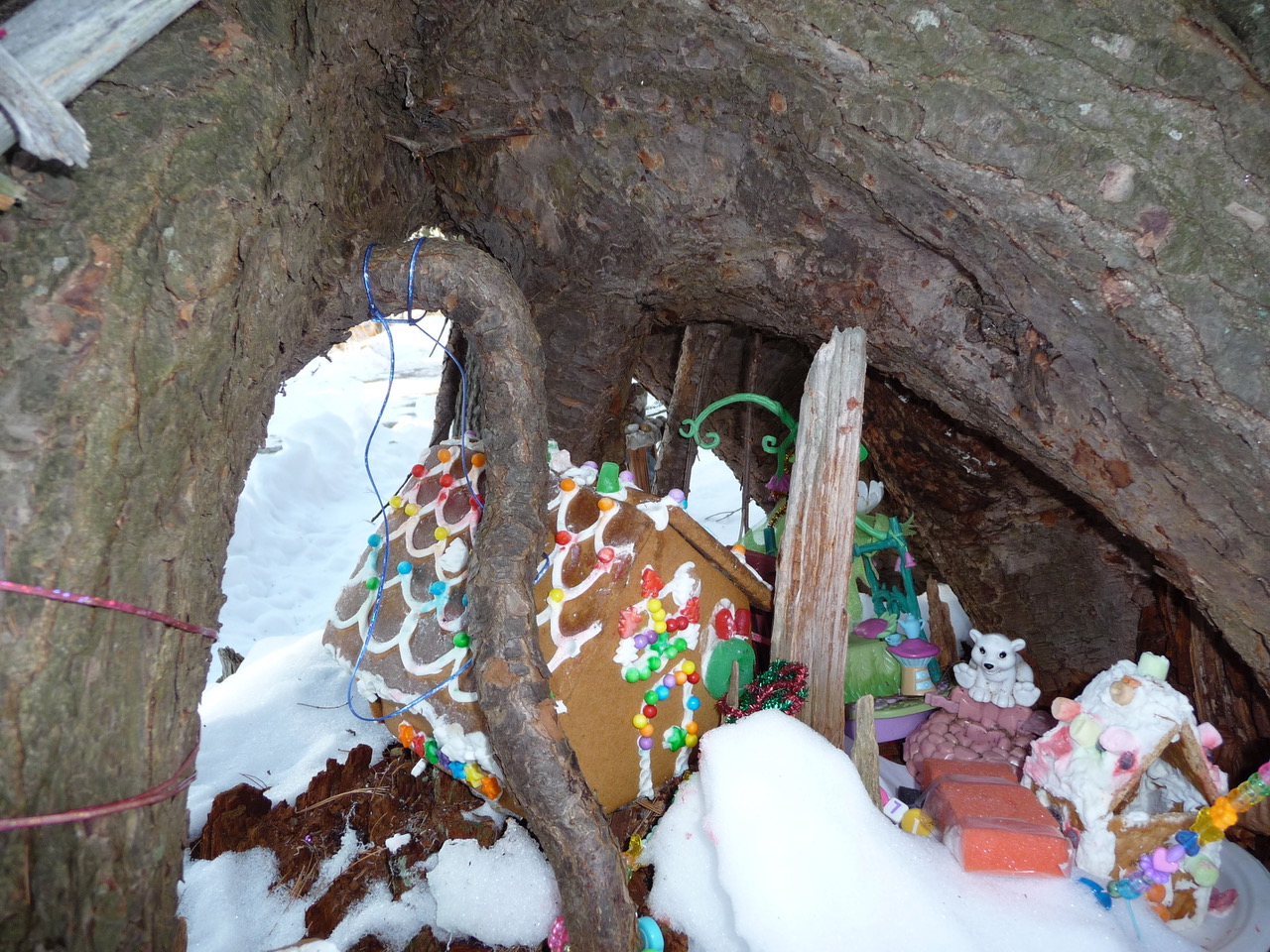 It took about a year for the word to get out to the adults in the neighborhood that I was the fairy godmother. My husband accidently spilled the beans to a dad whose daughter was a friend of the little girl. I found out that the operator of the little pink jeep had been a 4-year-old girl with waist-length reddish gold hair named Reilly. The woman accompanying her was her mom. When seeing this tree on one of their walks, she had envisioned a fairy kingdom and with the help of her mom, they had made it so. She had named it the “Fairy Tree.”

Sometimes Reilly would bring her friends to visit. With loving hearts and hands they made crafts for the fairies, left notes and built walkways, furniture, annexes and even a wild violet garden for them. And the fairies (working through the loving hands and hearts of myself, Reilly's mom and another parent) left them trinkets such as affection stones with power words like love, joy, hope, share, respect and kindness printed on them, and handcrafted coloring books with pictures of local butterflies, flowers and some trivia about each, along with many other things nature and fairy.

The day came when Reilly outgrew her treks to the Fairy Tree but to my delight two other little girls in the neighborhood discovered it. Could it have been a coincidence that the two little successors were named after flowers just like the flower fairies? You can't make this stuff up.

I had been in the process of reconnecting to awe, wonder and enchantment when the Fairy Tree came 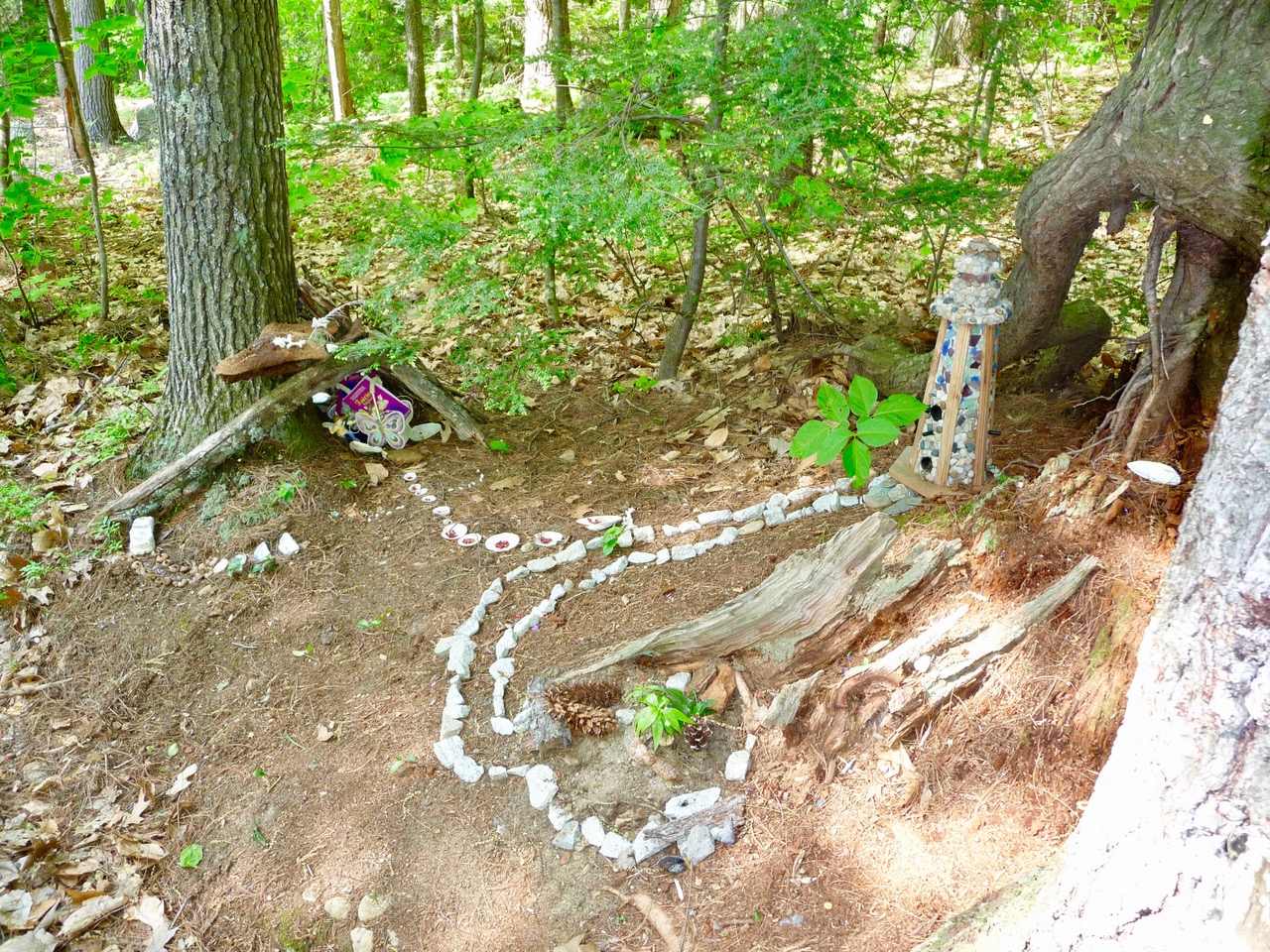 about. If I had given up on it after the first few necklaces disappeared I never would have known all I would have missed. I can only speak for myself, but I'd have to say that the Fairy Tree uplifts everyone it touches—children and adults alike.

The lake house did get winterized along the way and then there were snow fairies. I live here full time now so the “Stay Home” order has provided me with lots of meditation and nature time. I hadn't realized that I had lost my twinkle in the last couple years. Meditative walks in the woods were bringing back my sense of awe, wonder and enchantment. So yesterday I spent some quality time resurrecting the “Fairy Tree” in anticipation of my granddaughters. Some of the original items are still there including the lighthouse Reilly built so the fairies could always find their way back to the tree from season to season. It’s hard to believe that the “little girl on the pink jeep” is graduating from high school this year and will be going off to college, and that the fairy godmother has graduated to Fairy Grandmother.

So much love was exchanged for love’s sake alone at this tree. That reminder will always be something worth finding our way back to from season to season! Thank you for leaving us with this beacon, Reilly!

Loss of connection, even with oneself, can be a gradual thing. So gradual that you don’t even notice. That's why "retreats" are so valuable. They help us find our way back to the Love we have strayed from. The Fairy Tree was a retreat of sorts. I'm certain of that now. 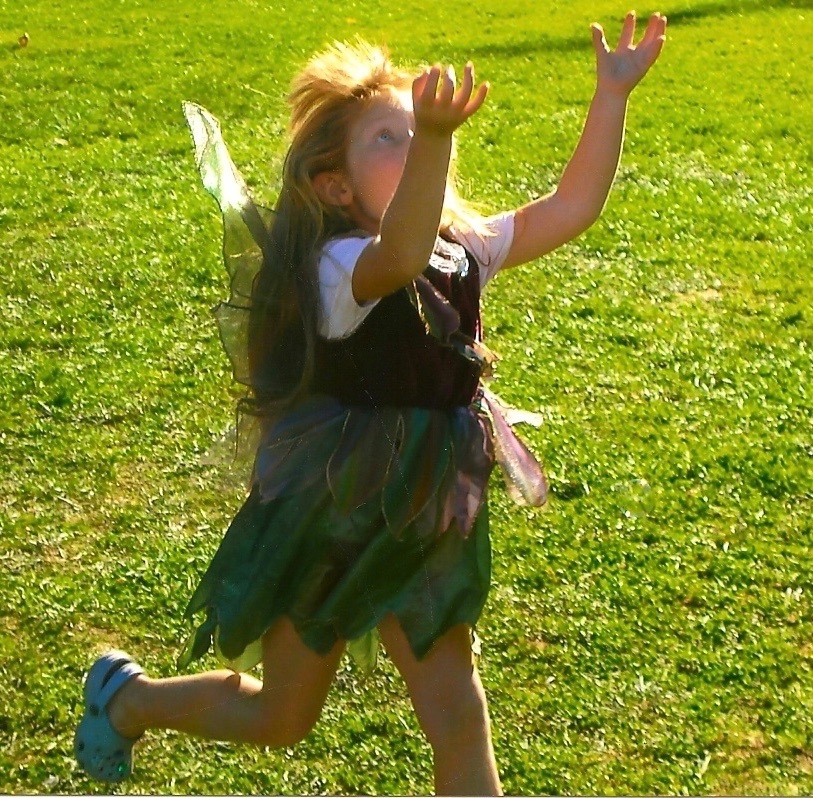 My hope is that you have reconnected to the awe, wonder and enchantment of Life and Love in your own way during this retreat from your routine. Or if you are in the throes of the pandemic, that perhaps our story will offer you a little respite and prompt your reconnecting at a later date. It’s amazing what we can gradually lose over a period of time and what we can gain when that schedule gets interrupted. There is always a blessing in their somewhere. Hopefully next time we will remember to step out of our lives and voluntarily retreat before getting sent to our rooms.

And just so you know, as I was editing this piece, a young girl accompanied by a woman and an older boy walked by. I had never seen them before. Guess what the young girl had in her hand? You probably guessed it! The pink Mardi Gras necklace pictured in the header of this post. Twinkle, twinkle.