I like to read the story of Calvary during the Easter season. Jesus is my hero and his story of resurrection is 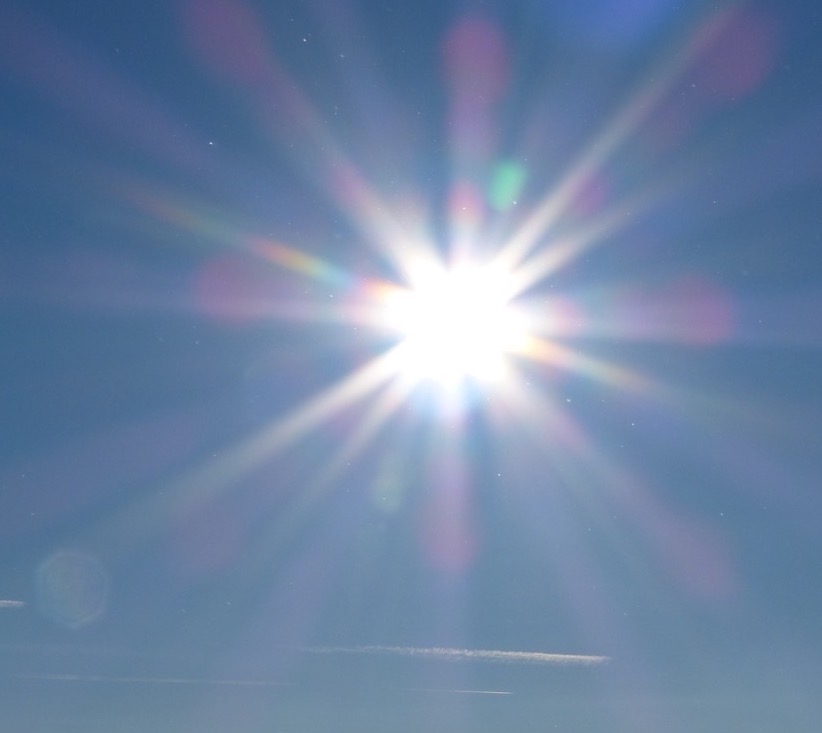 rich with wisdom we can thrive on. This year I also felt called to read up on Passover. A smidgen of Native American wisdom found its way into the mix as well. My findings melded into a potent homeopathic remedy for transcending these tumultuous times. I hope you extract some value you can thrive on as well.

I honestly did not know much about the Jewish Passover tradition. What stood out in my study was the observance of the removal of chametz (leavened bread). The premise behind the observance—the “why” part—is always the fascinating part for me.

You probably know that Passover is the celebration of Moses leading the Israelites out of slavery after 400 years. It is said that in the Israelites’ haste to leave Egypt they didn’t have time for their bread to rise so the removal of chametz during Passover is symbolic.

In case you are unaware of Passover traditions like me, chametz includes anything made from the five major grains (wheat, rye, barley, oats and spelt) that has come into contact with water and been allowed to ferment and “rise.” Ashkenazic Jews also place rice, corn, peanuts, and legumes in this category. In addition to the removal of chametz commemorating the haste of the Israelites, I found that it also symbolizes the removal of “puffiness”—arrogance and pride—from the soul.

I view the development of pride and arrogance as a substitute for healing our wounded self-esteem. When feeling small we often attempt to derive value or fulfillment from outside ourselves rather than remember the value given us and within us from God.

I don’t know about you, but eating an excess of carbohydrates throws me into a food fog. Some of these chametz items physically puff me up for sure. When I gravitate toward carbs it’s a heads up that I’m experiencing more emotion than which I was consciously aware. I know about food as an external source of comfort but I had never really thought about the correlation between feeling small and seeking foods that would make me feel bigger as solution so this perspective added dimension to my understanding. Whether it be emotional eating, or information to defend myself, or leaning too hard on an accomplishment to prove my value—it's all puff—signs of feeling small.

How interesting that fluffernutter sandwiches were my comfort food during the earlier stages of the pandemic—not only for myself but for many others based on my FB poll. (In case you didn't know, fluffernutter is peanut butter and Marshmallow "Fluff"—originally a New England thing.) Foods rich in carbs definitely won the popularity contest. Based on the puffy food choices, humanity has been feeling pretty small these days.

How do you puff yourself up when feeling small? What value do you, or have you, been attempting to derive from outside yourself when you didn’t understand your feelings as a call to heal your wounded self-esteem? 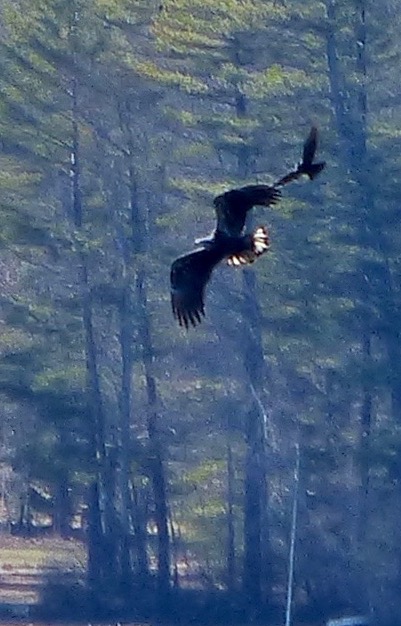 In the midst of my desire to extract something I could thrive on from the season, I witnessed an immature bald eagle being taunted by a group of crows. It’s a fairly common occurrence. Based on the size difference I’d imagine it’s just a nuisance to the eagle. As I sat with the image I could relate to feeling pecked at. Have you ever felt like someone was pecking at you? Sometimes it's tempting to go after them, isn’t it? Or maybe for you it's about being the bigger person when pecked. These responses are 2 sides of the same coin. They are the aggressive and passive versions of pride and arrogance—taking something personally and puffing yourself up bigger than the other person in an effort to feel better.

A temptation from inside yourself to puff is revealing a wound in you. It's ego-based. When it’s not bothersome you either don’t really notice or figure the person pecking must be having a bad day and respond tenderly.

I’ve never seen an eagle retaliate when pestered by crows or blue jays even though they easily could. Jesus didn’t retaliate in the story of Calvary although he easily could have as well.

Jesus was like the eagle. The mob, religious leaders and rulers were like the crows. Those doing the pecking are feeling inferior—in fear—not in love. No one who feels all good about themselves goes around pecking or puffing. The leaders and rulers felt intimidated by Jesus. I’d dare say they suffered from envy—unhappy admiration. Jesus was modeling who they could be with a pure heart, but it rocked the fear-based foundations they were invested in and they were holding tight to them. They could just as easily have been inspired if they had been in their right minds.

Jesus was tempted by the leaders and rulers to defend himself and he could effortlessly have. He was also tempted to prove he was the messiah—the bigger person—by performing a miracle. He said no to both invitations. He didn’t even appear to wrestle with the choices. Jesus stood steadfast in his power which was love and integrity. The others stood in weakness perceived as strength—inferiority (in-fear-iority) and domination.

Jesus responded with tenderness, “Father, forgive them, for they know not what they are doing.” (Luke 23:34) I do believe that with his pure heart Jesus saw their behaviors as calls for love.

Part of the re-membering is that you've probably experienced a fall from grace or 2 in your past—been guilty of pecking at one time or another. Be willing to be humbled. Forgive yourself for who you've been when you forgot your roots in love and it will be easy to forgive others for their falls from grace. The rest of it becomes just a bunch of he-said-she-said. You thought you were justified in your hurtfulness just like them. You didn’t know you were operating from inferiorness at the time anymore than the person pecking you now.

The eagle flies closest to Great Spirit. When someone is trying to hurt you they have forgotten their eagle-self and are identifying with their ego-self. Eagle is symbolic of our connection to the Divine. Our ego-self is fear-based. When someone is pecking at you, belittling you, wearing you down, envious, they are the one feeling small. The person doing the pecking is calling for love. Everything we do is love or a call for love but calls for love can only be heard by someone who is loving.

When taking pecking personally, I call that a tall order to love because it requires me to go the extra mile that love calls for—to heal my wounded self-esteem. In order for me to hear their pecking as the call for love that it is I must be in my eagle, not in my ego. I can’t genuinely have compassion for someone when I’m taking their behavior personally. Don't respond until all that is YOU is remembered—that you ARE the bigger person. Not better. You are whole. You are beautiful. You are lovable and loving. You are valuable. You are cherished by God and so are they. You've identified with your ego-self in the past and are humbled to find yourself on the receiving end. Once you re-member who you are YOU will respond in a way your unhealed self never could.

I really like this image of the eagle and the crow because when tempted to puff we are believing we are smaller than the crow rather than the other way around. The eagle and Jesus represent a state of grace. For us to achieve that state calls for the commitment, discipline and practice it takes to transcend our ego-self—to be led out of slavery. When love is in our heart we will see as Jesus sees—an attack as a call for love and not as an attack at all. We won’t even think to retaliate or puff ourselves up in some other shape or form but rather seek our higher self (our inner Moses, our inner Jesus, our Eagle Self)—our connection to Great Spirit—for guidance regarding how we can best be of service to Love.

Re-membering brings us back to a state of wholeness. Our painful past experiences never said anything about our value, we just thought they did. We can’t change our past but we can change the meaning we’ve attached to it. For example, with a heart filled with love we can revisit our past and see yelling parents as calling for help, calling for love, sporting wounds from their past, emotionally immature, and see ourselves as caught in the crossfire. We can give our wounded parts the hugs they have been longing for, retrieve our lost value and bring them back into our heart. Rather than project parents onto others and perpetuate our wounding we can forgive them for how they handled feeling small and set ourselves free. We can emerge from being pecked more whole, healed, grateful, forgiving, openhearted, connected and filled with love rather than more arrogant, fragmented, prideful, self-righteous, separate and guarded. 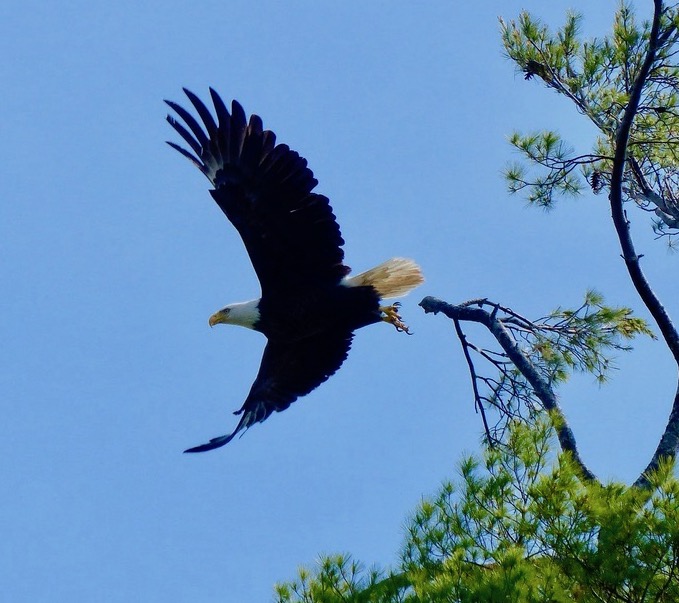 “Eagle represents a state of grace achieved through hard work, understanding, and a completion of the tests of initiation which result in the taking of one’s personal power.” ~from “Medicine Cards” by Sams & Carson

Everything, on a spiritual level, is either love or a call for love. We are human. We fall. It's part of life. It’s how we "rise" that counts—by puffing ourselves up or by ceasing to be slaves to our egos. Now that you are aware that there is a choice to be had when feeling small, what will you choose?